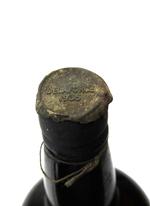 Delaforce was founded in 1834, when John Fleurriet Delaforce was asked by his London employer to set up a new Port wine company for the partners of Martinez Gassinot. Delaforce rapidly became established as one of the leading Port wine companies developing its sales worldwide. Between 1894 and 1906 the company was distinguished with a warrant as supplier of Port wine to the Portuguese Royal Household. The company still exists today but was acquired by the Taylor-Fladgate Fonseca group in 2001.

The Croft 1935 has a noticeably deep mahogany hue with light amber rim. This is the oldest Croft with …

From the excellent 1935 Vintage, Bottled to commemorate George V Jubilee. The port is tawny with some red in colour. …

92 points from the Wine Spectator… 'Superlative finesse in a bottle. Light red, with a claret-like black currant nose, …

The Croft 1935 has a noticeably deep mahogany hue with light amber rim. This is the oldest Croft with …