The Many Faces of Italy

Although the likes of Barolo, Barbaresco and Chianti may be household names when it comes to Italian wine, the country produces many more varieties less well-known outside of its borders. Some of these names are for regions and some for grapes, but here we have put together a bit of information about seven of the more popular varieties found around Italy – so when you are handed a bottle with Cirò, Cannonau or Primitivo on the front you will know what to expect!

Freisa is a variety native to Piemonte in northwest Italy, with two of its own DOC’s – Freisa d’Asti and Freisa di Chieri. Used for different styles; both sweet and dry, still and sparkling, the grape creates a wine often referred to as a ‘love it or hate it’ style. Less well-known today, Freisa was very popular in the late 19th Century partly due to its hardy nature: being resistant to disease made it very attractive to growers in the post-phylloxera years. Wines made with Freisa often have tannins a first time drinker would think over-the-top, a bitter finish and some residual sugar which helps take the edge off these aspects, making them challenging for new consumers but often a refreshing option for true Piemontese wine fans.

Grignolino is a variety native to Piemonte, used often as a local curio due to the pale, shallow red wine it often produces. Named for the high numbers of pips in its grapes, the wines show extremely high levels of tannin and acidity, without the warmth or depth of its neighbours in Nebbiolo and Barbera, and as such have not found many fans outside of Piemonte, (aside from a few vineyards growing it in California). Grignolino has two DOCs; Grignolino d’Asti and Grignolino del Monferrato Casalese, both created in the 70’s during a boom period for Piemonte. Mainly used for varietal wines, (wines made from solely this grape), Grignolino was once tipped to become the Beaujolais of Piemonte, but nowadays is more of a curiosity of the area and often acts as a second-string wine, to be drunk by Piemonte wine lovers while other wines such as Nebbiolo-based bottles develop over time.

Primitivo is a grape well-known for its inky, deeply coloured, highly tannic wines with high alcohol content and intense flavours. Mainly found in Puglia, in the hot south of Italy, the grape is also grown in other countries such as Croatia and the USA – where you may know it by their name for it: Zinfandel. In the early 1800’s, the grape was migrated to the States where it found great and immediate success. After a drawn-out thirty years of disputes, including legal action by the Bureau of Alcohol, Tobacco and Firearms in America, DNA research from the University of California at Davis was released in 2002 which conclusively proved Zinfandel to actually be an American renaming of the Italian Primitivo grape. Along with the high tannin levels in Primitivo (or Zinfandel) wines, a bitterness is often found which together require a few years of ageing to mellow.

Cirò is not a grape but a region, a DOC hidden deep in the South of Italy in Calabria. One of the oldest named wines worldwide, Cirò is the only DOC from Calabria to have maintained its reputation all the way through to today. The area produces some white wines with Greco Bianco and Trebbiano grapes, but is mainly dedicated to reds – all of which are made with 95% Gaglioppo and topped off with some of the same white grapes to add a suppleness to the wine. Much like other styles and regions around Italy, Cirò Rosso Riserva wines are matured before release, partly in oak barrels, while Classico wines are made with grapes grown at the historic heart of the DOC.

The Gaglioppo grapes used for Cirò Rosso wines are often grown nowadays in trellised vines for monetary and efficiency reasons, but the finest are grown using the ‘alberello basso’ method of vine training – resulting in a much bushier vine, more akin to a small tree, which requires hand-picking. Wines produced using the grape are always tannic and full-bodied, with a high alcohol content. All of these aspects combine to make a well-structured wine, usually with a range of crushed berry flavours and some secondary notes of spices. Although generally a wine to be drunk young (within half a decade), some of the heftier options can take a decade to soften out the tannins and reach their peak.

Barbera is another red-wine grape native to Italy’s Piemonte region, although it is found across the country as well as in Australia, California and the New World, adapting easily to its new environments and creating quality wines worldwide. However, even with its adaptability and global success the grape peaks in its native home: in the eponymous DOCs of Barbera d’Asti and Barbera d’Alba, where well-drained, limestone soils and southerly slopes provide it the perfect conditions. Used in blends as well as varietal wines, bottles made with solely Barbera are becoming more and more common with Italy’s move towards favouring varietal styles.

As ancient and ingrained as most Italian varieties, Barbera wines were favoured centuries ago for their ‘rustic-yet-generous’ nature; they were a favourite among Savoyard (Sardinian) army officers, who claimed it helped them keep courage in battle and was their “sincere companion”. Naturally high in acidity, Barbera wines produce complementary cherry flavours, often turning from the bright red cherry of youth to a more dense, sour cherry and a warm plummy note with ageing. The method of ageing, however, is often debated over: traditionally longer maceration is used and less oak (meaning less secondary oaky flavours and more tannins and structure), while more modern styles call for barrel-matured wines which are more well-rounded and approachable. Because of its acidic nature, Barbera can survive more heated climates than most, while still giving refreshing wines.

Dolcetto is yet another Piemonte-native grape, although it is also known (and grown) in Liguria as Ormeasco, as well as having a presence in the USA and Australia. The grape is regarded in much the same way as its Grignolino neighbour: a locally produced wine with several DOCs devoted to it, which serves its purpose more as a placeholder while more powerful Barbera- or Nebbiolo-based wines mature. Because of its status as Piemonte’s ‘third grape’, Dolcetto is often grown in the cooler, higher vineyards of the area – but the grape is a naturally early-ripening variety, which in cooler sites tends to keep more of its acidity as well as ripening later on.

Wines created from the Dolcetto grape are typically soft and fruity, brightly coloured with gentle spicy aromas and nutty undertones. They are known for the low levels of acidity they tend to possess, which is both the quality for which they are named and the reason they perform more impressively in cooler vineyards than their Nebbiolo or Barbera cousins. They are, however, often very tannic – making production an exercise in balance, as short fermentation can reduce the tannins but with them the aromas too. Many more modern styles of Dolcetto are following in New World footsteps, becoming increasingly rich, fruity, oaky and alcoholic.

Cannonau is a grape grown throughout the South of France, Spain, Australia, the USA and Italy. While in Italy – usually in Sardinia – it is known by the name Cannonau, in France and Spain it is known by the perhaps more-recognisable Grenache or Garnacha (respectively). Some believe the grape to have originated in Sardinia, but its versatility has led to a huge global presence. A grape which suffered a reduced status in the 80s and 90s, Grenache/Garnacha/Cannonau survived and made a comeback earlier this century – now even being cultivated in emerging nations such as Mexico and Israel.

A hardy variety with strong wooden trunks, the grape is often grown free-standing as bushy tree-like vines. Because of its resistance to weather such as wind and drought, the vines are often grown in arid environments, which results in a very alcoholic wine. The grape itself is a late-ripening variety with thin skins, which gives varying levels of alcohol, acid and tannins dependent on its growing conditions; usually low to medium, some old vines in Chateauneuf-du-Pape or northern Spain can produce very concentrated wines which will age for decades longer than their counterparts. Generally known for its blends with Syrah or Mourvedre, a purely varietal Cannonau will usually show rich spices and berry flavours. 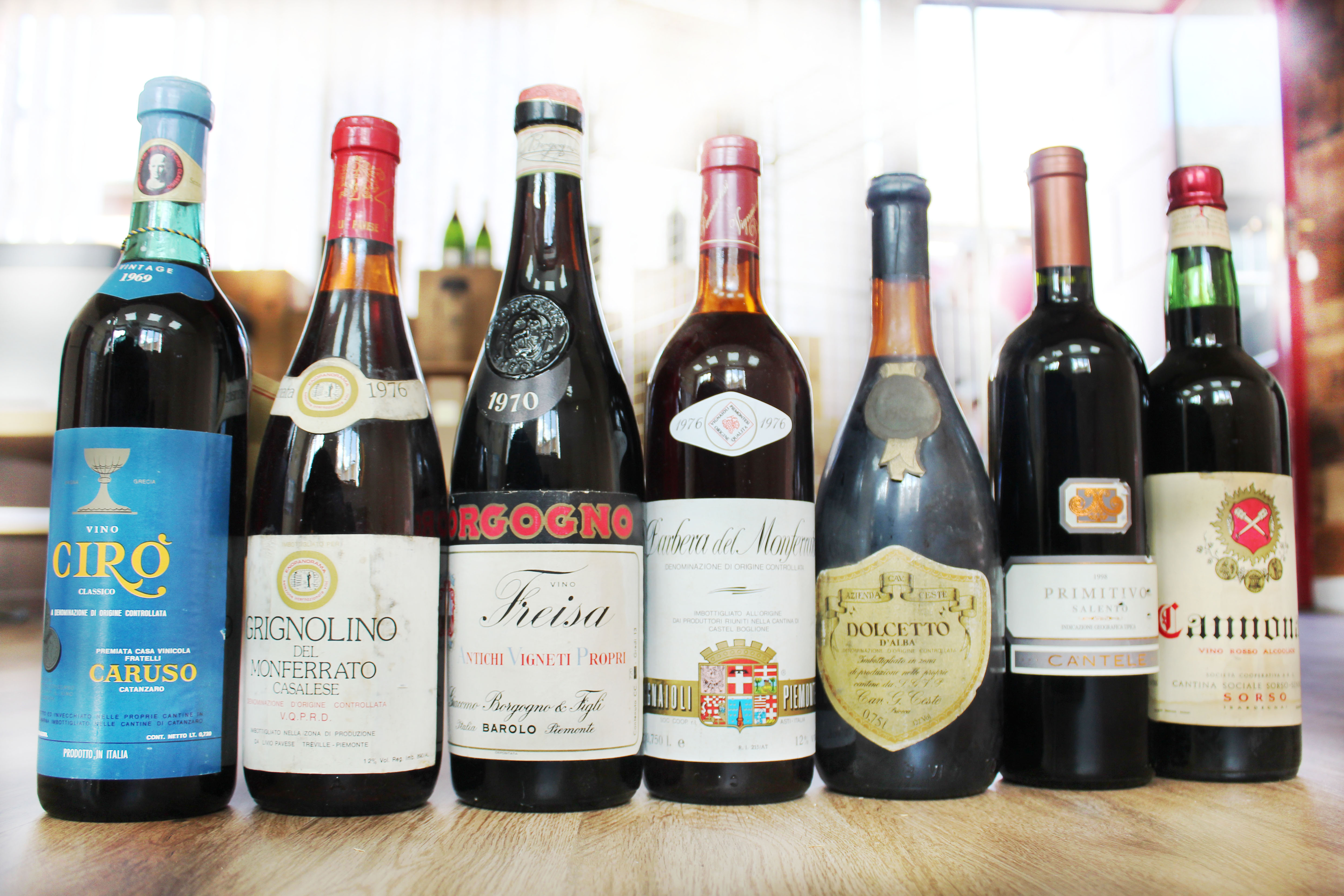 A selection of the varieties discussed above.