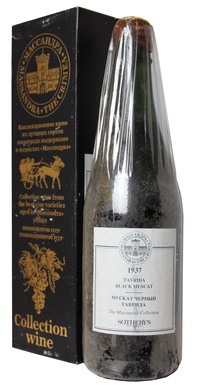 Tavrida Black Muscat 1937 wine. The Black Muscat grape variety was brought to the Crimea in the first half of the XIX century and became known under the name of Muscat Kallyaba. The wine distinguishes itself with its strikingly bright juicy ruby-garnet colour, smartly sparkled in a glass with various soft glints of ruby and beautiful precious crystal colour.

The wineries in Massandra were built during the reign of Czar Nicholas II. During the process, wine caves containing thousands of bottles were constructed beneath the city. This “personal wine cellar” of the Czar contained tens of thousands of bottles. These caves survived the Russian Revolution, both World Wars, the fall of Communism, and Yakov Smirnoff. In 1990, about 13,000 of these bottles – never before available in the West – were put to auction

Sotherbys Massandra Collection
The wineries in Massandra were built during the reign of Czar Nicholas II. …

This fortified wine was part of the Massandra collection offered by Sothebys.

Sothebys Massandra Collection
The wineries in Massandra were built during the reign of Czar Nicholas II. …