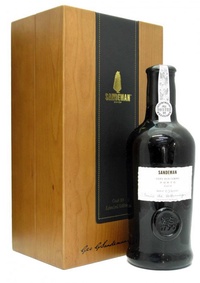 Sandeman’s Cask 33 is a single cask of Tawny Porto that is being launched to coincide with the celebration of Sandeman’s 225 years in 2015. The port includes wines of up to 70 years old that have been created by different generations of Sandeman master benders.

This release is a limited edition of only 685 bottles. The bottle design reproduces the style of those bottles originally used at the time of the founder in 1790 and are hand blown by one of Portugal’s last great artisanal bottle works.


Each year the winemaking team taste all the wines on the aging inventory, and when necessary, make adjustments in keeping with the house style.

“This particular cask, from a lot of 40, hasn’t been touched for the last two years. Back in January, when head winemaker Luís Sottomayor tasted it again, knowing that we were on the look out for something special to celebrate our 225th anniversary, he found that Cask 33 showed such a promising evolution and great character that we singled it out for this limited edition,” explains George Sandeman.

Normally used to add the finishing touch to Sandeman’s range of aged tawny ports, Cask 33 was destined for its own bottling.

“For the first time in Sandeman’s history we are launching the bottling of a single cask, Cask 33, due to its superb qualities that epitomises our style of tawny portos”, concludes Sottomayor.

Sarah Ahmed (the Wine Detective) writes of this wine
"Though ruddy of hue this Very Old Tawny is quite shy on the nose. And in the mouth it’s no blockbuster. Which is to be expected of Sottomayor, whose watchword is elegance. Thanks to its fine, nutty spine and freshness (it was aged in Vila Nova de Gaia from the off), it has lovely line to its dried apricot and, but for its subtly silken sheathe of caramel (salt caramel mind), a touch of cognac-like austerity. Which reminds you that this pared back tawny was conceived and raised as a component part of Sandeman’s age-dated tawnies" A great value port gift! The Quevedo Special Reserve White is a fortified wine from Port produced by …

The Quevedo Special Reserve Tawny is a fortified wine from Port produced by Quevedo from the best of tinta roriz, …