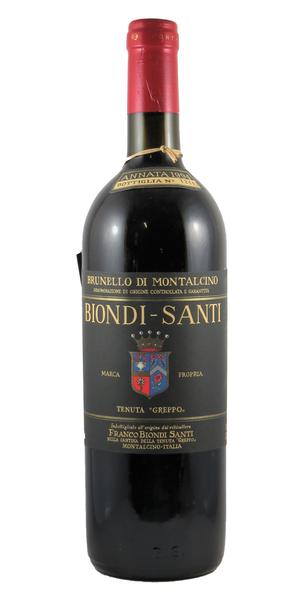 From Robert Parker's Wine Advocate: "Biondi Santi is a renowned name across the world, yet it remains an anachronistic wine, at odds with the vogue for rich, fruit-laden Brunello's that are lavished in new oak. Since the 19th century, the estate's raison d'être has been to fashion long-lasting wines, built to age over a century." (Producer Profile)

Biondi Santi's brunello di Montalcino is an elegant, age-worthy wine which is known for its brilliant garnet hue and its bouquet of berries with underlying vanilla and spice. A hint of earthiness brings balance to the finest examples.

Brunello di Montalcino is one Italy's most famous and prestigious wines. In Tuscany, its homeland, it shares the top spot with only the highly-prized Vino Nobile di Montepulciano and of course the ubiquitous Chianti.

This wine gained a reputation as one of Italy’s finest by the end of World War II. According to government documents of the time, the only commercial producer of Brunello was the Biondi-Santi firm, who had only declared four vintages by that time: 1888, 1891, 1925 and 1945.

Biondi-Santi's unique approach to enology took Brunello from Montalcino to another level, as he vinified his Sangiovese grapes separately from the other varieties. Today there are almost 200 winemakers producing this high-quality red, most of whom are small farmers and family estates.

Brunello de Montalcino is one of Italys most famous and most expensive red wines. It is produced in …

Brunello de Montalcino is one of Italys most famous and most expensive red wines. It is produced in …