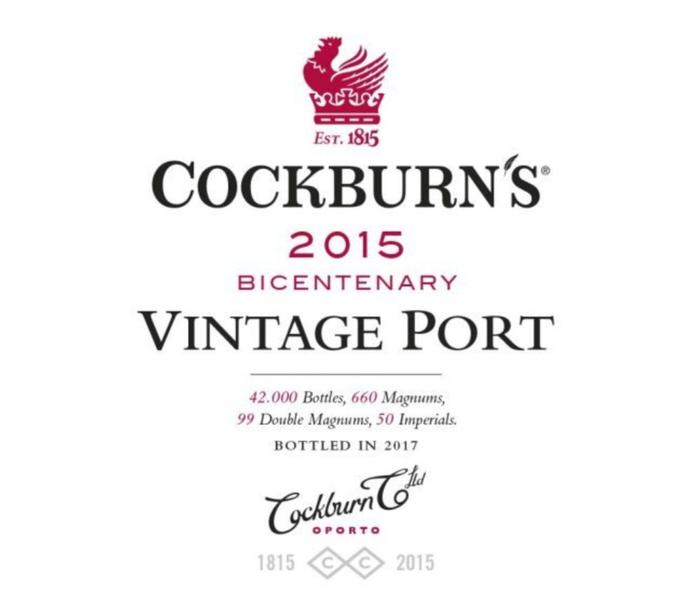 This 2015 Vintage Port Wine is only the second Cockburn’s vintage Port made by the Symington family since it acquired the brand name from Beam in 2010, having bought the vineyards and cellars in 2006. Its declaration of a 2015 vintage Port is the latest in a number of innovations and investment to mark the company’s bicentenary, with the brand having been founded in 1815. Up until the 1950's Cockburn’s was one of the Douro’s leading Port producers, with its Ports commanding some of the highest prices at international wine auctions. However its rapid expansion into the mass market in the second half of the century served to damage its reputation for fine wines.

Since 2010, the Symingtons have been working to restore some of its sheen, revamping the brand, investing in its vineyards and reassessing its historic collection of Ports to rediscover its past. After taking over the family conducted two research tastings with international experts, one in Porto in September 2012 that tasted back to Cockburn’s 1896, and another in London in 2015 that reviewed most vintages back to 1863. Both events identified the Cockburn’s 1908 as one of the greatest Ports ever made, and the Douro Superior as the birthplace of its finest Ports. Off the back of these tastings, the family made significant improvements to Cockburn’s vineyards at Quinta dos Canais and Quinta do Vale Coelho, both located in the Douro Superior.

The conditions that contributed to the release of a vintage Port in 2015 were described as “dry with 31% less rain than average”, with a relatively cool July and August. “The temptation was to harvest early after a prolonged period with very little rainfall, but the grapes were not ready,” said Symingtons in a release. “Rain fell on 15th and 16th September and the best grapes at Quinta dos Canais and Quinta do Vale Coelho were picked from the 21st until 4th October; these were the 13 days when the finest Ports were made in the Douro Superior.”

Fantastic aromas of crushed berries and flowers. Some mineral undertones. Violets. Very fine and polished with ultra-fine tannins. Medium sweet. Fresh and extremely clean. Very crisp and clean for such hot year. This celebrates the 200th anniversary of Cockburn's. Best from 2026 onward.
*JamesSuckling.com*

Great vitality and purity of fruit, focused and precise. Exudes freshness, which springs out of the glass. Aromas of fleshy, black plums and eucalyptus fragrance. Flavours of red cherries on the palate. Well-toned and muscular, full-flavoured with typical Cockburn’s ‘grip’.
*From cask samples, Symington tasting room, March 2017*

92 points from the Wine Spectator… 'Superlative finesse in a bottle. Light red, with a claret-like black currant nose, …