This 2015 Vintage Port Wine from Fonseca was released under the Guimaraens label. Managing Director, Adrian Bridge, commented: As Fonseca’s 200th anniversary year, I am delighted that 2015 has produced a Vintage Port of such excellent quality. It will be released as a Guimaraens Vintage with a special commemorative label to mark the occasion.’ He added, ‘The 2015 Vintage Ports are attractive and approachable on the nose but supported by big, firm tannins. The Guimaraens Vintage 2015 will make excellent early drinking but will not disappoint those who prefer to cellar it for the future.’ Fonseca’s wine maker, David Guimaraens, remarked: ‘The dry spring and summer produced low yields but the healthiest crop we have seen for many years. A balanced ripening season gave the 2015 wines their characteristically firm but well integrated tannins.’

Guimaraens Vintage Ports are made in certain years when a classic Fonseca Vintage is not declared and are generally more supple and approachable when young. An excellent choice for early drinking they nevertheless have the depth and stamina to mature in bottle. Traditionally, Guimaraens Vintage Ports were blended from the best produce of the firm’s two Pinhão Valley estates, Cruzeiro and Santo António. However in recent years, the wines of Fonseca’s flagship property, Quinta do Panascal, have become an increasingly important component. Panascal is located in the Távora Valley and is one of the most highly reputed Port vineyards. Cruzeiro, on the east bank of the Pinhão River, has been supplying Fonseca since the 1870s and its wines have contributed to the firm’s Vintage Port blends since 1912. Close by, Santo António is another historic property, highly rated since the 1761 classification of port vineyards and the site of award winning work in the field of sustainable viticulture.

Opaque purple-black at the centre with a very thin, purple edge. A classic Fonseca nose redolent of heady, woodland fruit, powerful but also very fine and complex. The dense blackberry and blackcurrant aromas form the backdrop for a display of fresh, minty, balsamic scents and resiny notes of gumcistus and wild herbs. Discreet hints of exotic wood, liquorice and black pepper provide an additional dimension of complexity. The thick, tightly-woven tannins provide both firmness and volume to the palate which is built around a core of dense, dark berry fruit. Plummy, raspberry flavours emerge on the long, luscious finish, giving it an attractive crispness and lift. Fonseca’s 200th anniversary year has produced an exceptional Guimaraens Vintage Port, expressive and approachable but with the stamina to improve over many years in the cellar.

This 2015 Vintage Port Wine from Fonseca was released under the Guimaraens label. Managing Director, …

A gem that outshines the vintage, this is a dense and delicious port wine that shows some raisin and … 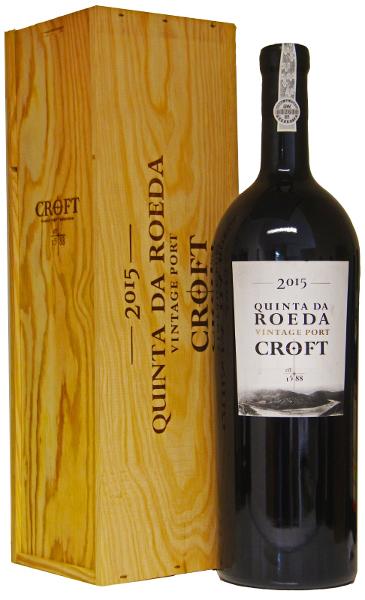