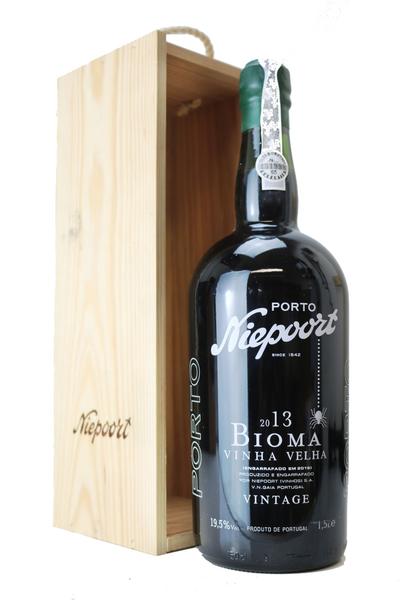 The 2013 Vintage Port Wine Bioma “Vinha Velha” from Niepoort is a single vineyard Vintage Port wine from aged vines at Vinha da Pisca. Appearance of deep purple accompanied by a purple rim. With time, the wine has gained in colour, but on the aroma the exuberant youthful fruit, so evident after its first winter has closed down, but is very much still present on the palate with dark plums and blackberries with firm grainy tannins on the mid palate giving both structure and power to the wine leading to a grainy but not aggressive finish. Pairs well with chocolate and caramel.

The vines are mostly 80+ years old, and are cultivated organically. A hot site which produces impressive tannins; it formed the backbone of Niepoort Vintage Ports for many years. However the best parcels were set aside for this wine in 2013, 2011, 2009, 2008, and in 2007 (known then as Pisca). Like Niepoort Vintage Port, Bioma was 100% foot trodden with 100% stems. Then It was aged in pipes (550 litre) and will be bottled in the third year after the harvest (2016) which, says Niepoort, is what happened in the “old days” when wines were shipped to England in pipes and bottled later. Though tight on the nose, Bioma is headily perfumed in the mouth with violets running through it. It’s dark and spicy, the tannins grainy – more textural – the fruit concentrated with a very fresh presence. Bioma is relatively inwardly focused as yet – it has much more to give in future years.