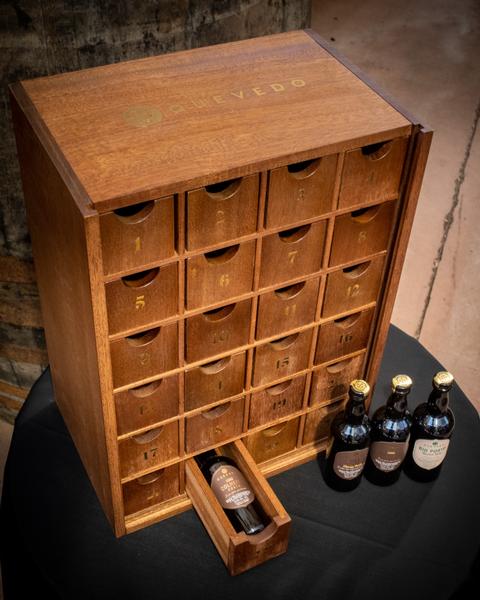 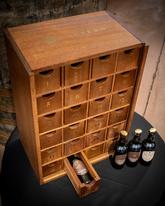 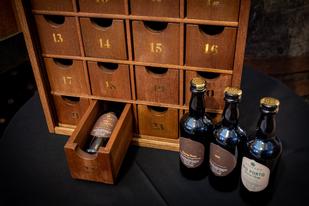 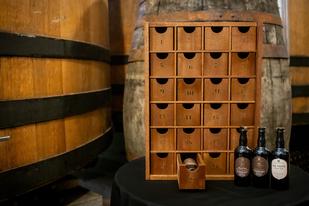 This is a serious gift for port enthusiasts, a limited-edition solid wood cabinet showcasing 24 of Oscar and Claudia Quevedo's finest port wines. As a lovely personal touch, each bottle is accompanied by a short video in which Oscar explains why each wine is special. This is accessible by a special QR code on each bottle.

Most of the ports have been released from the families own reserves, and many have never been on the market before. Every box is numbered and the production is limited to just 250 cases. We have just 100 cases to sell in the UK.

The solid wooden gift-box has been designed and made by Portuguese artisans and is a serious piece of furniture in itself. The draws are reversible so that it can be used for storage or refilled in future years. Dimensions: Depth – 7.5 inches Width – 11 inches Height – 15 inches

Inside every drawer you will find a different 90ml bottle for 24 days. Every bottle has its own online introduction by Oscar. The QR code is on each bottle so the you can scan it with you mobile phone. This will access the introduction. We have included the introductions below.

Quevedo is run by Oscar and Claudia Quevedo who are a brother and sister team. Claudia is one of the leading female wine-makers in the Douro and Oscar is the Marketing Director responsible for many of the innovations from the company. They have strong company ethics and are converting their vineyards to organic. Quevedo is located in the small town of San João da Pesqueira, right in the heart of the beautiful Douro Valley. Having sold their grapes for decades to Taylor-Fladgate, they decided to venture on their own in 1991.

Includes (all 90ml):
1970 White Colheita
A true rarity as very little white port was made and only a small fraction was released. Tasted from cask at Quevedo's cellars from a family barrel, this is a beautiful port of outstanding quality. The colour is dark amber, nose of mature fruit, hazelnuts with a touch of caramel and nutmeg. On the palate there is a great balance of acidity and sweetness. This is a drier style of Port that I find really refreshing, especially when served slightly chilled. This port has a finish that is endless. 98/100 VWP Tasting from cask feb 2020.
Calendar Video: 1970 White Colheita

1974 Colheita
The year of the Portuguese revolution. The 1974 has amazing layers of aromas, nuts, crème brûlée, caramel, dates and apricot. A beautiful port – that you will combine with any food. But please enjoy it on it’s own.
Calendar Video: 1974 Colheita


1995 Colheita
Not on current release: A beautiful light brown with hints of orange, ripe blueberry, cinnamon, and grape with
a backdrop of spice, with some influence from the oak. On the palate is shows a plum and Kirsch taste initially, with a
chocolaty note and hints of walnut on the aftertaste.
Calendar Video: 1995 Colheita

1996 Colheita
A great year for Quevedo - which has its own microclimate.
Calendar Video: 1996 Colheita