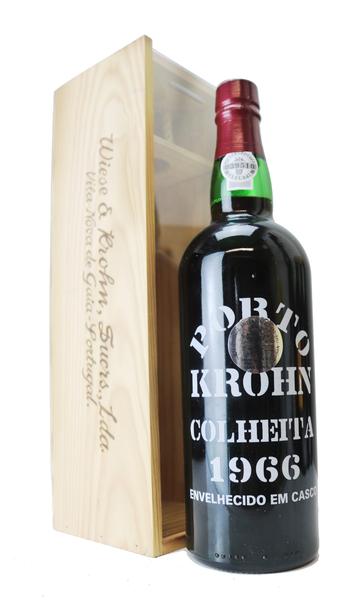 This rare bottle of 1966 Colhieta Port from Wiese and Krohn is a deep and intense tawny colour for its age with an amber-brown rim. Powerful, racy nose with very complex aromas of brown spices, violet perfume, and balsamic. Lively, full and unctuous with long pecan nut and toffee finish, but well balanced in acidity,s weetness, and alcohol.


Wiese & Krohn was founded in 1865 by two young Norwegians, Theodor Wiese & Dankert Krohn. At the beginning, it was a very small firm, based on the export of Port wine. In 1880 Theodor Wiese decided to sell his share to Dankert Krohn - the Company was simply too small to be shared by two owners - but he went on working for W&K as a commercial agent in Norway. On the death of Dankert Krohn in 1906 the business was carried on having as partners, in addition to the widow and daughters of the founder, Gomes Figueiredo and Edmund Arnsby, the former a Portuguese bookkeeper and the latter a British manager, who had both been engaged as employees at the time of Dankert Krohn. During this period, the firm extended its commercial activity to new markets. Gomes Figueiredo retired in 1921 when Edmund Arnsby acquired the share of the Krohn family and took as new partners his brother Frederick - an experienced Port taster who came from the House of Croft - and Edmundo. Falcão Carneiro, a Portuguese export manager who had been working for the firm since 1910. Edmund Arnsby died in 1933 and his brother Frederick retired four years later. Edmundo Falcão Carneiro acquired their shares and thus gave origin to an entirely Portuguese owned Port company still going under the name of its two Norwegian founders.

A superb port from a classic vintage. The medium garnet colour has held up quite well with some bricking on the rim, …