1985 Calem Vintage Port has impeccable provenance. Stored at the Calem cellars in Porto since bottling.

1985 was an outstanding vintage for port and the Calem does not disappoint. The 1985 Calem has a beautiful and intense brick red colour with nuances of tawny on the edge. The nose denotes intense and persistent aromas of red berries, black cherry alcohol and blueberry. On the palate this is drier style than most of the the English shippers. There is good mouthfeel, high acidity and resolved tannins. A little sour cherry and redcurrant makes this an interesting twist. Persistent finish. Still has ageing potential. 89/100 Very Good VWP Tasting TC May 2020 - Decanted for 5 hrs before tasting.

Reviews:
89 Points - MS e robertParker Mar 2021
The 1985 Vintage Port is a field blend—heavy on the "big three" of Touriga Nacional, Tinta Roriz and Touriga Franca—coming in just under 106 grams per liter of residual sugar. When I originally saw this about five years back, it showed great. Whether due to the passage of time or just a different bottle, this is not as interesting. It's still good; it has some very modest tannins, but there's still a little bite on the finish. It seems fully resolved at roughly age 35, but perhaps was better and more expressive the next day. What it does best is be mature. That is, it shows the complexity and classic flavors of maturing Port. It is lovely, gentle, fresh and tasty. That said, for the moment, until some other bottle proves otherwise, I'm shortening the drinking window. That's not to say it won't meet the original prediction of 2035 or better, as these do not fall off the table and decline only slowly, but I think some caution is advised. It might be more likely to go down than up at this point.


93 Points MS Mar 2016
The 1985 Vintage Port is a field blend (heavy on the 'big three' of Touriga Nacional, Tinta Roriz and Touriga Franca) coming in just under 106 grams per liter of residual sugar. This is a current submission, although obviously not a new wine. I remember seeing this once many years ago, closer to release, and it didn't seem to have nearly this much substance. It has come along well. In a pretty good place now, this wine's tannins are moderate--but definitely still there--while the fruit is lush and rich, only somewhat mature. The delicious finish is laced with chocolate. It has clearly lost its baby fat, but it doesn't seem old. Still rather concentrated, its calling card is that luscious fruit. Don't misunderstand, though. This still has a real backbone and the structure supports the fruit very well. It should last another couple of decades, perhaps more, but it is pretty close to peak. It demonstrated the capacity to improve and become more lively and better balanced with some air (and later, with several days in the fridge). So, there's no rush, but don't hesitate to dive in. It should hold nicely for some time, perhaps more than indicated.

1985 Calem Vintage Port has impeccable provenance. Stored at the Calem cellars in Porto since bottling. … 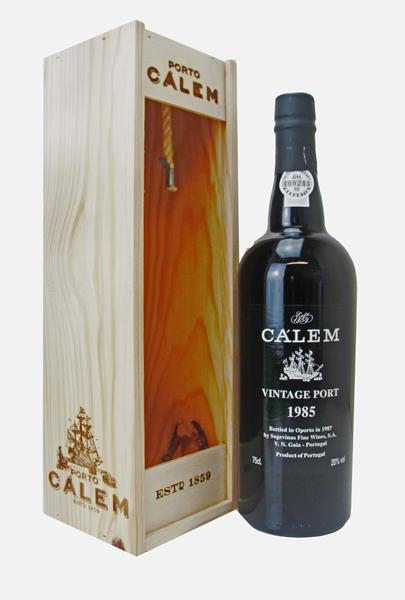 1985 Calem Vintage Port has impeccable provenance. Stored at the Calem cellars in Porto from bottling until purchase. … 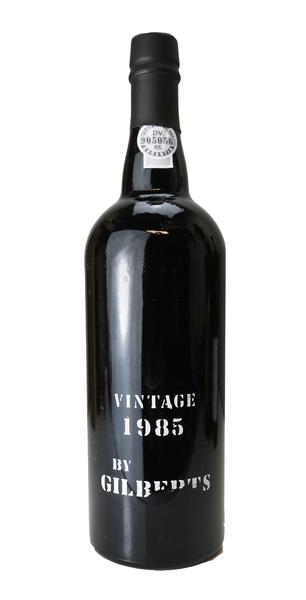 Pale in colour, rosy in tone; 20% opaque. Harsh on the nose, sour cranberry. Sweet fruit on entry with …