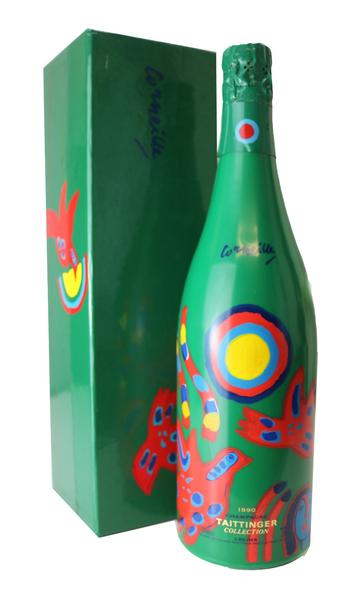 For the Taittinger Collection, Corneille expresses his art using the two core values which were constant in his work from 1946 onwards: line and colour.

Figures are formed using gestures made in colour on a solid, or modulated, coloured background. Strangely-shaped birds, reminiscent of those found on bas-reliefs in Coptic monasteries or on the totem poles of Indian tribes, are depicted on a background which is painted in a green, similar to the vine leaves themselves. The birds are ready to take flight and break free from cages and barriers as universal messengers of joy - much like the wine contained within the bottle.

Amongst Champagne's luxury cuveés and super-premium labels, Taittinger's wines live on one extreme end of the style spectrum.
While many top Champagnes can be quite difficult to approach in their youth, with laser-like focus and delineation, even austerity, Taittinger instead tends to be immediately open and welcoming. These are beautiful, delicious Champagnes, with bubbles lazily winding their way up to the surface, inviting you to take another sip.

Amongst Champagne's luxury cuveés and super-premium labels, Taittinger's wines live on one extreme end of the style spectrum. …

In 1964, the 32nd Venice Biennale was the scene of a great furore. Robert Rauschenberg, a 39-year old American artist, … 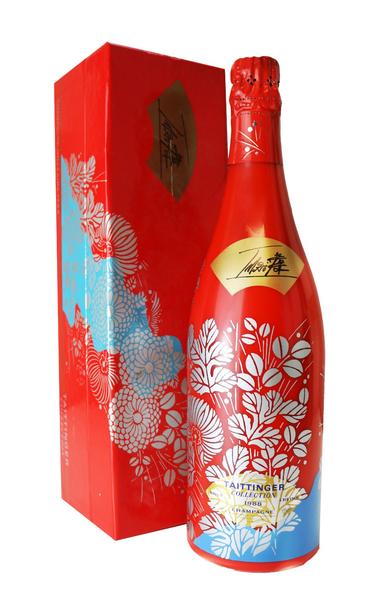 Amongst Champagne's luxury cuveés and super-premium labels, Taittinger's wines live on one extreme end of the style spectrum. …